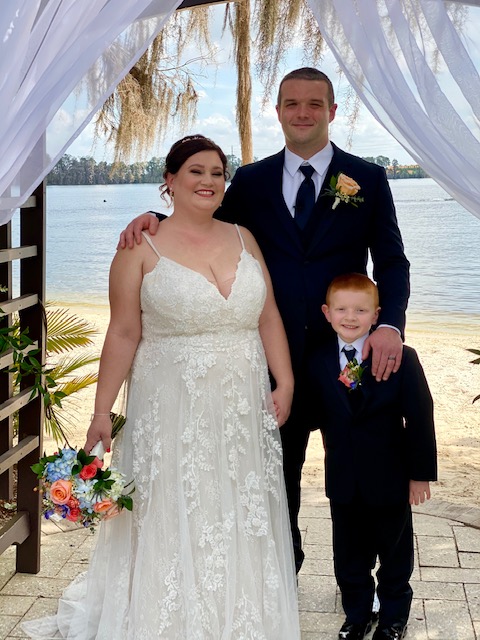 It was a beautiful morning for Amy and TJ’s wedding at Paradise Cove in Orlando, Florida.  After dating in high school the couple went there separate ways in college and didn’t reunite for a number of years.  Then when one of their roommates was dating a friend of his, the couple reconnected and the rest is history.
Amy with Blossoms created the amazing arch decor for this beautiful morning wedding.  With roses, orchids, and hydrangeas in the decor and the couple’s bouquet and boutonniere; it was out of this world.
Dominoco Castaldo from Castaldo Studios was on hand to capture every moment of the couple’s beautiful morning wedding.  From Amy slipping into her dress, the walk down the aisle and the ceremony.  Castaldo’s camera was everywhere it needed to be.
Faces by Shannon was up early for this beautiful morning wedding.  With an early start time for the ceremony, Shannon was on her game early and the results were amazing.
Cocktails Catering stepped up for this beautiful morning wedding.  When the ceremony was over the guests were ready for the delicious food that was prepared.
Rev. Glynn Ferguson, a Walt Disney World Wedding Officiant and owner of Sensational Ceremonies was asked to officiate their beautiful morning wedding.  Rev. Ferguson worked with the two of them to create a custom ceremony and was filled with messages of why they love each other.
Amy wrote:  TJ and I started dating back in 2006, when I was a senior in high school, and he was a freshman in college. We were together for about 8 months. While we were together, we were madly in love, but things were tough when we were both away at school. He went to college in Western NY at SUNY Buffalo, and I went down near NYC to Iona College. We broke up, and lost touch.

Over the years, I was married, had a child (Colin, who is now 5), and was divorced.

Fast forward to 2017- my best friend and his roommate started dating, and we started to get to know each other again. We went from being friends to being in an exclusive relationship pretty quickly.

Although we are definitely different people now than we were as teenagers, that spark was still there.

I’ve never met someone that I immediately click with as much as TJ. I know that he is the person I am supposed to be with for the rest of my life. He is kind, supportive, loving, and handsome. He is a great parent figure to Colin, which is so important and means so much to me. I love seeing their close relationship, and I love how we have become the most supportive and loving little family I know. TJ is one of a kind- I’ve never met a man like him. He is smart and compassionate. A hard worker and a true provider. I can’t say enough good things about him, and I can’t wait to spend the rest of my life with him
TJ wrote: There was a moment in an evening not too long ago that I felt moved by a wave of emotion and sentimentality, and I disclosed to Amy a secret that I felt kind of embarrassed to admit (because even though what I said to her was one hundred per cent earnest, saying it out loud felt kind of saccharine); any moment that presented itself where one might make a wish (when the clock read 11:11, or blowing out candles on a cake, or when a movement in a clear sky could vaguely be interpreted as a shooting star), I would unerringly and unfailingly make the same wish every time: that Amy and I and Colin and any children that may join our family in the future would always be a close-knit and loving family forever. Ever since I was fortunate enough to have had Amy reenter my life, I have had the privilege of spending the past three years with the most intelligent, witty, kind, loving, and (obviously) beautiful woman I could have ever had hoped for; Amy understands everything that I don’t, she perceives every detail I overlook, and she responds with consideration and understanding in everything we come across that I fail to appreciate. Amy represents the perfect compliment to all of my foibles, and (as I once was possessed of the insight to point out) will always be my missing piece. Once, we began a conversation wherein Amy was given to a flight of fancy, as she began to list every conceivable item that she envisioned as being necessary to complete her vision of what our home design would look like (this has been an oft-referenced conversation, and I’m smiling as I write this); this became forever emblazoned in my brain as a 72 point gold-plated Times New Roman font as the “Wants List.” Amy is such a wonderful woman, and I am the winner of the highest level of cosmic lottery that mankind could ever think to design in that I get to very soon call her my wife; I don’t think I could want for anything more, but if I had to come up with my own brief “Wants List,” I only want to keep making my aforementioned wish come true every day, and to be the kind of husband and dad that Amy can be happy and proud of (forever).
Congratulations .  We wish you a Happily Ever After!