People from across the globe come to Orlando as a way of escaping into what they dream of. Orlando is a fun place with tons of entertainment and plenty of sun. They come to enjoy those aspects of our wonderful city! Natasha and Adrian came for those exact reasons. The couple traveled here from their home in the United Kingdom to escape into fun and excitement . However, that dream was even more wonderful because they wanted to be married here. They had known one another for their entire lives. Natasha and Adrian went to school together, were sweethearts even then, and had grown up together. They have been a couple for the past eleven years.  And they came to Central Florida to become a married couple! 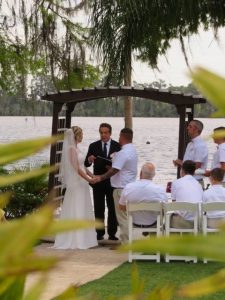 They found Paradise Cove on line way before their trip, and knew that it was something special. It was through Paradise Cove that they came in touch with their vendors. Paradise Cove refers only the very best. And so Married By Mail, Castaldo Studios, Flowers By Lesley and Sensational Ceremonies became involved.

Married By Mail was in touch with the couple even before their trip making arrangements for the couple to secure their Florida Marriage License. Natasha and Adrian were able to have their document notarized in the UK. Married By Mail actually had their license delivered to Lon Tosi, of Celebration, Florida, was their wedding officiant. Lon brought the license to the wedding with him. Seamless! They ordered their flowers from home as well, and the end result was spectacular. The brides bouquet was gorgeous. And of course, there was Cecily from Castaldo Studios on hand at the ceremony to capture everything photographically.

Lon had prepared a wonderful non-religious ceremony for the couple. They exchanged their vows, rings and kisses in front of a small group of family and friends. Also, they were on Skype for an audience back home. After the ceremony, the applause from those far away spectators could easily be heard by all at the venue. The music as provided by Paradise Cove was beautiful, the day was sunny. Everything as just perfect!

The couple and their group were planning to spend the next week visiting the Disney Theme Parks. We wish them much luck and happiness with their marriage!

And it all happened on a sunny beautiful day in Orlando, Florida!