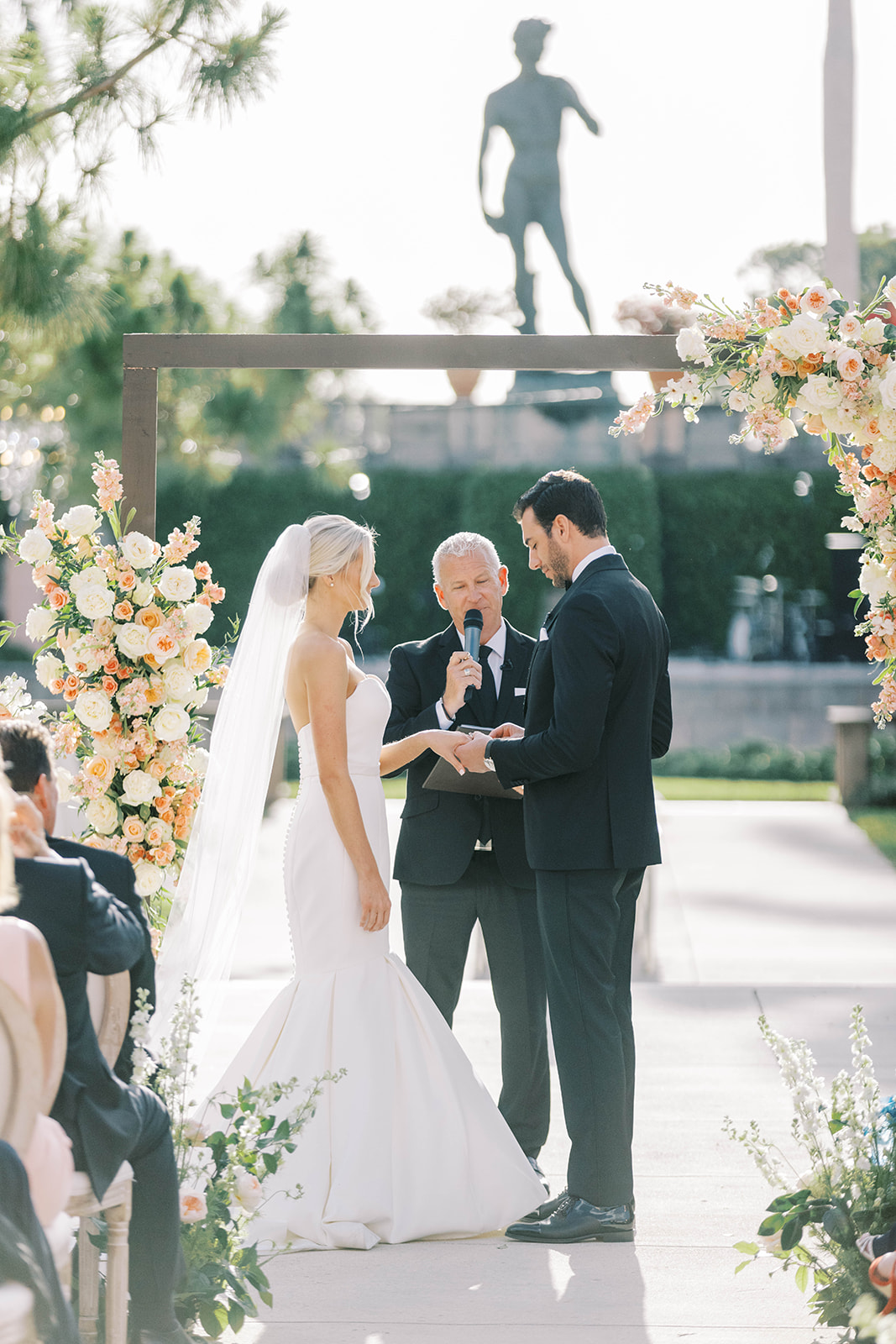 Taylor and Matthew came from Washington DC and chose the beautiful John and Mable Ringling Museum of Art as the venue for their wedding ceremony and reception earlier this year.

John Ringling was one of the five brothers who owned and operated the circus called “The Greatest Show on Earth.”  His success and entrepreneurial skills helped to make him, in the Roaring Twenties, one of the richest men in America, with an estimated worth of nearly $200 million.  In 1911, John and his wife, Mable, purchased 20 acres of waterfront property in Sarasota.  Construction of the Ca’ d’Zan began in 1924 and was completed two years later.  Soon after, John built a 21-gallery museum to house his treasure trove of paintings and art objects.  After his death in the late 1930’s, Ringling bequeathed everything to the people of Florida.  In 2000, the state passed on governance of the Museum to Florida State University.

Today, The Ringling is home to one of the preeminent art and cultural collections in the United States.

As a Wedding Venue, it offers breathtaking architecture, beautiful tropical grounds and stunning views of Sarasota Bay.  It is a setting of timeless elegance that defines romance and the romantic; especially in the museum courtyard filled with replicas of Greek and Roman sculpture, including a bronze cast of Michelangelo’s David.

Taylor looked amazing as she was escorted down the aisle by her father, to join Matthew in front of their wedding arch.  The couples’ custom designed wedding ceremony included a Thank You to the Parents; Special Readings The Art of Marriage, the Past and 1 Corinthians 13.  Then, in front of their family and friends, and amazing backdrop of the Museum Courtyard, the couple shared their own personal vows, exchanged rings and were pronounced husband and wife by Rev Rick Lackore of Sensational Ceremonies.

Ceremony Music provided by Keith James, Florals and Décor by Victoria Blooms, Videography by Eli Myers Studio, and Event Coordination by Kerri and her team with NK Productions.  Special thanks to Cornelia, with Cornelia Zaiss Photography for providing this beautiful picture during their ceremony.

Congratulations to the new Mr. and Mrs. Matthew Fleagle!